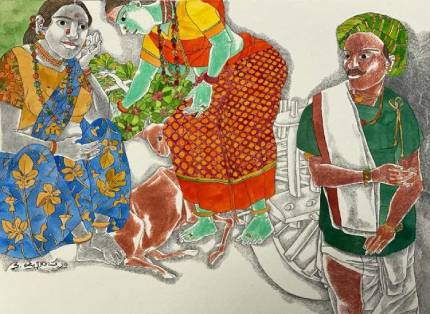 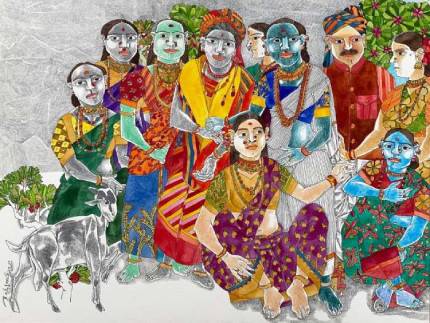 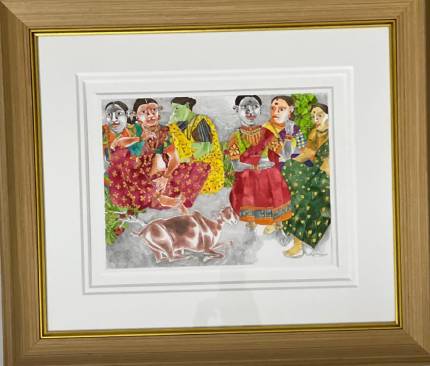 
Born in 1940 in Nizampur, Andhra Pradesh, K. Laxma Goud completed his diploma in Drawing and Painting from the Government School of Art and Architecture, Hyderabad, in 1963; he then went on to study Mural Painting and Printmaking at the Faculty of Fine Arts at M.S. University, Baroda, from 1963 to 1965. Goud displays versatility over a range of mediums, from printmaking, drawing, watercolour, gouache and pastels to glass painting and sculpture in bronze and terracotta. Over the many years of his artistic career, he is known to have moved from one medium to another with elan. Fellow artist T. Vaikuntam, in one of his interviews, reminisces that it was Laxma Goud who introduced him to the art of sketching and made him aware of the possibilities of this medium.

When one looks at Gouds work, rustic, raw, and potent might be the first words that come to mind. His portraits of men and women represent the dynamic Indian ethos rather than particular individual identities. A recurrent theme with the artist is that of the erotic, treated as an active and powerful aspect of male and female sexuality and existence. Gouds work is dramatic; his protagonists are raw and vivacious in their appeal, imbibed with energy that reverberates through his strokes and textures. Most of Gouds art is centered on the rural, recreating landscapes from his childhood as if they were frozen in time. In the artists later work, his figures turn softer, more introspective than brash in their outlook.

Recently, the artist has worked on a series of lush landscapes in vivid colors reminiscent of his youth spent in rural Andhra Pradesh. Like most of the artists work, these are generally executed in a miniature format, in what is perhaps an attempt to create an intimate atmosphere in which the viewer can engage directly with his creations.

In 2007, the exhibition, Laxma Goud 40 Years: A Retrospective was organized by Aicon Gallery, New York. Other recent solo shows of Gouds work include Sculptures, Bronze and Terra-cottas at the Guild Art Gallery, Mumbai, in 2006; Recent Terracotta, Ceramic, Bronze Sculptures at Gallery Threshold, New Delhi, and Pundole Art Gallery, Mumbai, in 2006; and those held at Aicon Gallery, New York, in 2003; and Grey Art Gallery, New York, in 2001-02. Some of the noted group shows in which his works have been features are From the Vault at Aicon Gallery, London and New York, in 2007; 17th Anniversary Show at Gallery Sanskriti, Kolkata, in 2007; and Back to the Future at Gallery Espace, New Delhi, in 2006. Gouds work has also been a part of the Sao Paulo Biennale, Brazil, in 1977; and Indian Art Tomorrow at the Philips Collection, Washington D.C., in 1986.

The artist lives and works in Hyderabad.

Notification - We do not usually display K. Laxma Goud's work, only send it to private art collectors and interested art buyers.