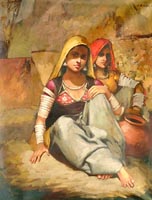 Jiten was born in Assam in 1936. His innate artistic talents were apparent in childhood. Jiten graduated in Civil Engineering in 1963 and was commissioned in the Corps of Engineers, Indian Army, in 1964. Attaining the rank of Colonel, he retired prematurely in 1990 to devote himself to painting.  Jiten has accumulated a deep and abiding knowledge of philosophy and Sanskrit literature and this is reflected in his painting, as are his boyhood memories of day to day life in rural Assam. His work has been the subject of academic research even at the doctoral level. Various universities have honored him and appointed him a Resource Person for matters pertaining to art. He had held several exhibitions in India and abroad.

I have possibilities, I know, but under which stone they lie buried I do not know, said Albert Camus. But it appears Jiten was able to find the stone overlaying his particular possibilities even as a child. An unspoiled freshness and a moving simplicity are the hallmarks of his work.  Aristotle said We are what we repeatedly do. Excellence, then, is not an art but a habit. Jiten concurs wholeheartedly. He would find slipshod and mindless effort enervating, he feels, given his habitual diligence and attention to detail, attested to by the minutiae woven into the magnificent oriental rug that is his work.  His is a highly individualistic interpretation of our visual reality.  Jiten paintings may be broadly categorized as Figurative Abstract. In Jiten's work, seemingly divergent Realism and Abstraction converge to a brilliant point. For Jiten, the subject matter of a painting is a subsidiary since he believes in art for art's sake and revels in the sheer joy of creation.  He is concerned mostly with eye-catching rhythms, vibrant color harmonies, and arresting spatial configurations products of his fertile imagination. He is an intrepid artist essaying oils on canvas with assiduousness and intelligence. His works make for an anthology of blank verses in color.

No serious art can be created without the concern for real life. After all, art conveys the convincing expression of life. I am attempting to express the observed and experienced aspects of man's environment. While doing so I put my utmost effort to maintain the balance between the form and the content to save my paintings from being brand named as either illustration or pattern. I always believe the intangible quality of sincerity and sensibility of the artist with his time brewed technique can certainly enrich the work of art to make a meaningful contribution to add to our culture. The rightful integration of form, content, and skill can create genuine art. If anyone factor obscures the other, the art is devoid of life. No artist sees things as they look. Guided by inner instinct he develops insight to even create a new appearance, which is different from the original source. A genuine work of art can transcend the mind to the space beyond the limits of physical confines and evoke the feeling of expansion and movement beyond edges.

EXHIBITION
Aug 2012 A Life in Pictures, an exhibition at Sridharani Art Gallery, Triveni Kala Sangam, New Delhi
He has held several exhibitions in India and abroad.

HONORS AND AWARD
Various universities have honored him and appointed him a ‘Resource Person’ for matters pertaining to art.
His work has been the subject of academic research even at the doctoral level. Pranab Baruah Award

Notification - We do not usually display Jiten Hazarika's work, only send it to private art collectors and interested art buyers.