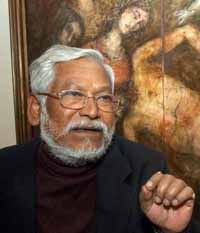 ABOUT THE ARTIST
Born in pre-Partition Bengal, Suhas Roy had a difficult childhood after the early demise of his father. With a supportive mother, he joined the Indian College of Arts and Draftsmanship, Calcutta, in 1953. He went to France on a scholarship with fellow artists Jogen Chowdhury and Dipak Banerjee, where he studied graphic art under S. W. Hayter and mural art at the Ecole Superieure des Beaux-Art, Paris. Inspired by European modernism, and later by the works of the Japanese artist Taikan he came across at Santiniketan, Roy incorporated them into his landscapes.

Roy's early etchings and landscapes gave way to his sensitive Christ figures and faces, inspired by Europe's churches and altar figures. These interests changed later to his paintings of women: beautiful, luminous and slightly melancholic, gazing at the viewer or away into the distance. The protagonist of his Radha series has remained his longstanding muse as the mythic embodiment of feminine beauty. Believing in the need for beauty in art, these have come to define his work. He worked with printmaking in his Crow series at Santiniketan, and his series Disaster captured the turbulence of Bengal's Naxalite movement. Suhas Roy lives and works in Kolkata.

Notification - We do not usually display Suhas Roy's work, only send it to private art collectors and interested art buyers.