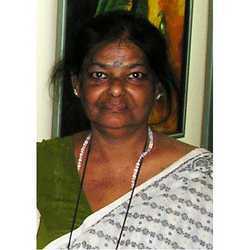 ABOUT THE ARTIST
She is one of the pioneering artists not only for Bengal but also for India and abroad because of her brilliant work of indigenous form and application of colors. Gifted with an inner sense of music she encompasses that arena of mind where words and melody are fused with the visual symphony. Her paintings are nothing but the voice of nature. Every moment deserves transformations of life eternally, having life and death simultaneously. She has thus been able to maintain this within her creations.