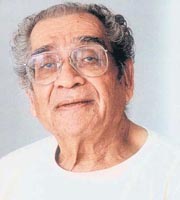 1949 Received a degree in Fine Arts from Sir J.J. School of Arts, Bombay

Akbar Padamsee was born in Mumbai in 1928. After his art education at Sir J.J. School of Art in Mumbai, Padamsee went to live and work in France in the year 1951. He was one of the first generation postcolonial Indian artists that sought cosmopolitan freedom in Paris and London during the fifties and sixties. Though widely spoken of as a modernist, Padamsee continues to resist easy categorization.

During his illustrious career, he explored a wide range of mediums and managed to remain fiercely experimental and individualistic. His artistic oeuvre is a formal exploration of a few chosen genres- prophets, heads, couples, still-life, grey works, metascapes, mirror -images, and tertiaries, across a multitude of media – oil painting, plastic emulsion, watercolor, sculpture, printmaking, computer graphics, and photography. His early portraits and landscapes in varied mediums of painting, drawing, and etching demonstrate a quasi-spiritual style of working. His oils have been characterised by a deep intensity and luminescence while his drawings exude a serene grace. Renouncing the rich color palette of his early years, he chose to paint in grey tones between the years 1959 – 1960 stating, “Grey is without prejudice; it does not discriminate between object and space”. These monumental works have been widely recognized for their rich and poetic quality. Like all his works, his recent addition of computer graphics also shows his distinctive command over the use of space, form, and color. He even made two short abstract films – “Syzygy “and “Events in a Cloud Chamber”, where he animated a set of geometric drawings.

Since the seventies, his work is seen to alternate between two major genres, luminous metascapes – his signature works, and the human figure which he continues to imbue with an arresting presence. He has a deep and abiding interest in Sanskrit texts, a glimpse of which finds resonance in his statement on sun-moon metascapes of the mid-seventies.

He has exhibited his works in numerous exhibitions in India and abroad. In 2010, he was awarded the Padma Bhushan by the Government of India. Other awards include a gold medal from the Lalit Kala Akademi in 1962, J.D. Rockefeller Foundation fellowship in 1965, Kalidas Samman by the Government of Madhya Pradesh in 1997, Lalit Kala Ratna Puraskar in 2004, the Dayawati Modi Award in 2007, Roopdhar award by Bombay Art Society in 2008 and Kailash Lalit Kala award in 2010.

Padamsee lives and works in Mumbai.