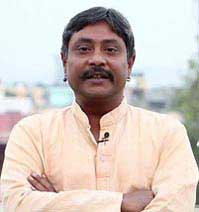 Born and brought up in a land known for its beautiful art and age-old tradition, Siraj Saxena made his debut in 1993 at Taj Arts Gallery, Indore. During that time, he was pursuing his BFA from Government Institute of Fine Arts in Indore, Madhya Pradesh.

Most of what Siraj creates is inspired by a landscape of a certain kind. The only difference being that the “scape” is more often than not Siraj Saxena at Work his representation of inner geography, rather than a physical location. Although pieces of natural elements such as leaves, familiar shapes & patches of colors remain quite manifested in his art form, most of his work remains non-representational. His creations are usually left to the eyes of the viewer for interpretation. What sets Siraj apart in the league of some of the most talented artists in India, is his artistry of adding rural and tribal elements into the contemporary landscape.

Siraj Saxena’s art, in a world, divided and fragmented, tortured and violently pushed around, surrounded with kitsch and cruelty, is an act of affirmation. An art that hopefully leads to tranquility and contemplation.

The great Serbian poet Vasko Popa said: “In the sky of your words, the sun does not set.” Siraj is forever looking for such a sky. His art could somewhat audaciously asset, again Popa’s words “we will teach this darkness to shine.” Art anywhere cannot possibly aspire for more!