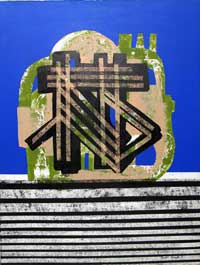 He has shown his work extensively around India. In 1995 he had his first solo show in Hotel Welcome Group, Baroda and another in 1997 at the Chitrakoot Art Gallery, Kolkata. In 1998, he was honored with the National Award by Lalit Kala Akademi and in the same year his works featured in seven group shows, including a show at Galerie 88 which was in collaboration with ITC. Many more shows followed in India and in 2007 he participated in ‘Resplendent Reveries’ organized by Nitanjali Art Gallery, Grand Hyatt, Dubai. In 2008, he had a show titled “Metaphysical space” at Tamarind Art in New York, followed by “Mellifluous Metaphors” at Weiling Gallery in Kuala Lumpur, Malaysia.

Dasgupta’s works have featured in major collections across the world including the Victoria Albert Museum, London and Modern Art gallery, Govt. of India.
total price: /-
proceed to checkout