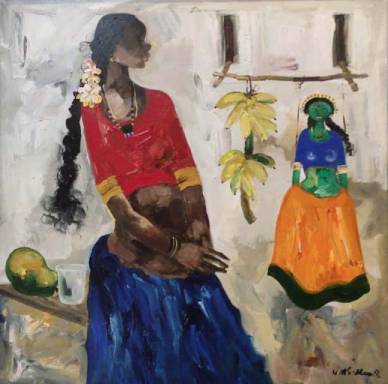 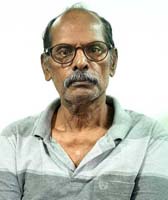 ABOUT THE ARTIST
"The historical location of Badami, as well as the innocence of the people there, whom I find very hard-working and honest in all aspects, inspire me to capture their simplicity through my paintings." The simple, rustic people of the Deccan Plateau in South India, with strong Dravidian features (an ancient race in South India), are the subjects of J.M.S. Mani's paintings. His art is an amalgamation of Indian culture with Western formalism. His figures are modeled three-dimensionally, with bold brushwork, similar in style to those of the Impressionists. Mani chooses to represent his characters, the balloon seller, the women with a rooster, in a simple and orderly way. They narrate an untold story; much like the famous "Dancing Girl" of the ancient Mohenjodaran civilization of the Indus Valley; a story that tells the origins of an entire race. Although seemingly simple, Mani's images are also representative of an entire civilization. The vibrant colors of his paintings contrast with the dark skin of his characters, creating a sense of drama in his compositions. And it is his colors and compositions that are expressive, rather than the figures themselves. The figures appear frozen within the canvas, their beauty and grace enhanced by the restrained use of gesture and expression. J. M. S. Mani has a Diploma in Drawing and Painting from the Ken School of Art, Bangalore. He won the Karnataka Lait Kala Akademi award from 1981 to 1983. He has had 19 shows in India and in London. He has participated in 43 group exhibitions, such as the SAARC Exhibition at Chitra Kala Parishath, Bangalore and the Bharat Bhavan International Print Biennale in 1989. He currently lives and works in Bangalore.

Notification - We do not usually display JMS Mani's work, only send it to private art collectors and interested art buyers.