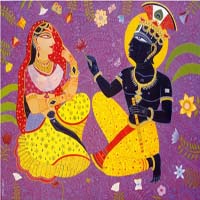 ABOUT THE ARTIST
The ancient civilizations of the entire world, especially that of
India, with their spectacular manifestations, create an enchantment
In me. Side by side age-old Indian philosophy, history, religion,
folk-culture, literature,folk-art,etc.stir the very core of my mind.
In every nook and corner of my home state, West Bengal, folk climes
have its presence felt. Hence my utmost sincerity is to house those
dew and dust strewn jewels into my compositions.