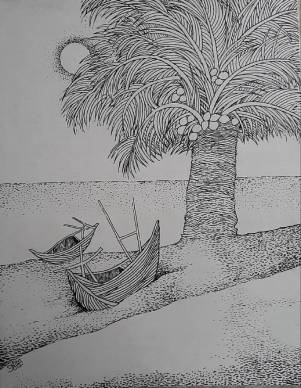 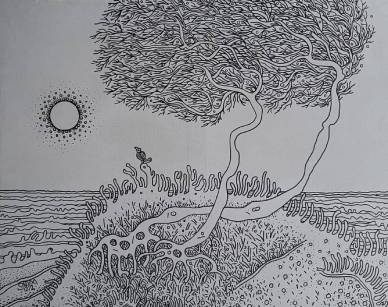 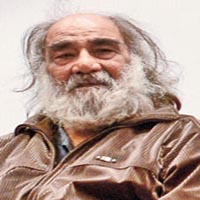 Prakash Karmarkar came from an artistic family; his father was a renowned artist of his time. Unfortunately, all of his father`s paintings were destroyed in the Hindu-Muslim riots in the 1940s, which also ruined his family. By 1949, both his parents had passed away, forcing him to abandon his studies at the Government College of Arts and Crafts, Kolkata. He joined the army for two years and then quit to work as a graphic design manager for a medical firm in Kolkata. Virtually penniless and desperate for a break, in 1956, he held a street exhibition, the first in the city, hanging his works along a corner.

In 1957, Karmarkar participated in the national art exhibition held in New Delhi. Here, he received an award for his watercolor. By then, he had also begun holding more street exhibitions, which catapulted him into the limelight. The artist was a close friend of several poets. He would often sit with poet Shakti Chattopadhyay and while the latter wrote his poem, Karmakar would make his painting. Then, they would sell both their works together on street corners. Karmarkar also worked in artist Nirode Mazumdar`s studio between 1964 and 67.

The artist went on to form a group called the Society of Contemporary Artists in 1962, but within five years of its inception, the group began to disintegrate. By then Karmarkar had received a French Fellowship and he left to study in Paris. As an artist, he is considered a revolutionary in the sense that he doesn`t exhibit in art galleries. All through his artistic career, he has always exhibited on street corners. He says, "I do not want my paintings to be imprisoned within four walls."

Influenced by the works of Picasso and the classic impressionists, Karmarkar`s work reflects the degenerating society and the confusion that prevails in India today.

Prakash Karmarkar lived and worked in Kolkata. He passed away on 25th February 2014.

Notification - We do not usually display Prakash Karmarkar's work, only send it to private art collectors and interested art buyers.