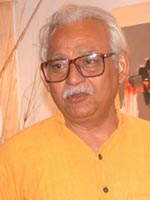 Date of Birth - 02-03-1981
EDUCATION QUALIFICATIONS
M.A. in Fine Art - 2004 (Drawing & Painting) Sharnbasveshwar College of Fine Art (P.G), Gulbarga University,
By creatively imagining tradition and mythological themes, my painting demonstrates how life extends beyond its own subjective limits. Further my painting represents the continuous challenge between the self and the world, the primordial and the modern, thereby bringing out contemporary values and realization. Historical, social and mythological aspects are centralized in my compositions. Despite being infused by original and radical ideas, the characters in my paintings continue to broadcast traditional values and true messages, attempting to strengthen the spiritual and moral character of the viewer.

The fantasy-tical world of Shahid Pasha.

It is a world where millennia-old Hindu mythological stories are portrayed in modern contexts in miniature painting style, by a born and bred Muslim, across mammoth canvases.

A scholar of Hindu mythology since the past 15 years, Pasha’s paintings have won numerous awards. His subjects, drawn from the Ramayana and Mahabharata, are as eclectic as Sri Rama winning the swayamvara contest to the three queens of Dasharatha returning to Ayodhya from the shopping mall; the gods and goddesses replete in their traditional finery. Look closely and the details are both charming and amusing. There is Shatrughan, with a pacifier, seated in a pram and a trophy with Sita’s image engraved on it.

His painting ‘Handle with care’, awarded the Kala Sanskar Award in 2012 by the Bangalore Art Foundation, is perhaps one of the finest examples of his interpretation of a mythical tale. Recounting the story of Ravana kidnapping Sita, the light bulb fills in for the magic flying chariot, Rama and Lakshman are shown chasing the golden deer on a train symbolizing time, and the horizon as a zipper depicts the earth and sky as never one, just appearing to be fused.

Not all of Pasha’s work, however, is built around mythology. But even when centered on mere mortals, the gods and goddesses are an integral part of the composition as can be seen in ‘Fairies taking away the Books’ for their reading pleasure and in ‘Termination of Devils’ where the gods give us beings a hand in our efforts to cleanse our souls of its debris.

The inspiration behind Pasha’s work is a deep-seated love for Indian legends and its translation to present times. A doctorate in visual art from Gulbarga, Karnataka, he is firm of the belief that God is everywhere, and more often than not among us.

When asked the rather politically uncomfortable question of the choice of his subjects and themes, he matter-of-factly states, “An artist is not a Hindu or a Muslim. An artist is simply, an artist.” And I feel a little silly for having asked the question in the first place.

He goes on to explain that there are deep social lessons in mythology for all of us to learn from, adding that no matter how much we move with times and changing cultures, our gods and goddesses in our temples remain draped and bejeweled in ancient costumes. So wouldn’t it be sacrilege to dress them otherwise in his paintings? His scenes are invariably staged on a street. It is his way of saying that art needs to be brought to the people, and not the other way round. And therein, piece by piece, his world starts getting woven together.