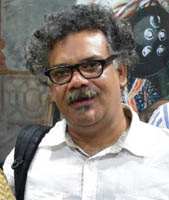 Born on 24th April 1970 in Calcutta, West Bengal, India. He is an inborn artist. Before doing his professional course on Art and Painting from Govt. College of Art & Craft, Calcutta, he has been showcasing his Art and Paintings in different Art Galleries in Kolkata. Such an Artist did his Professional Course on Art in 1993. His family heritage plays an important role in devising the eclectic trend that Probal Banerjee displays his paintings. He has a spiritual bent of mind. He inherited these qualities but transformed them to suit his personality. There is no apparent religiosity or spirituality in his choice of subject, but his forms, which are derived from Eastern Impressionism or Post-Impressionism and infuse some of the folk elements, reveal some sort of spiritual sobriety and concentration in a delineation of lyrical beauty. The mythical world has been a source of a subject in his paintings and he has delineated it from the standpoint of Indian Perspective of Art and Painting. Through linearity, he creates visual pleasure that unveils the hidden treasures of beauty in life.