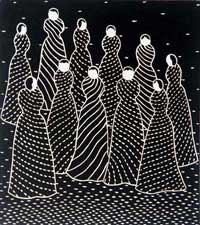 ABOUT THE ARTIST
Born in 1975 in Tamil Nadu, Guhas work is straightforward, bright, and has an idyllic momentum to it. Demonstrating a fascination for natural and geometric forms, Guha painstakingly replicates the images on her surface, creating lyrical groups of forms that are indifferent to each other and yet have meaning only as a collective whole.
Guhas preferred medium is oil on canvas; working figuratively, she clones a single shape in various sizes, filling up the canvas with multiples of a single form. Using a vivid palette and a deliberately contrasting background, she manages to render for her groups of figures a context or setting in which to exist. Guhas work is at once playful and narrative, and easily recognizable due to the uniqueness of the form.
I find most of the women in India especially in rural areas live a very secluded life and they do not come and venture out in the open. This is what I have depicted here. I have made this arch above these women. I have not shown any facial features as they may belong to India or elsewhere. These lines and dots are an inspiration from the Indian Folk Art. These lines and dots add a dimension to my paintings.

I have been associated with barmanarts.com right from the beginning. The website is very artist friendly providing a platform to emerging and serious minded artists. At times of extreme financial difficulties Barman Arts Online has come to the rescue by helping to sell my works . I recommend Barman Arts Online to all artists who want to showcase their works online.