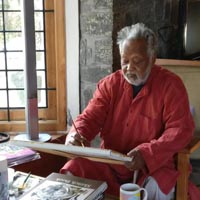 ABOUT THE ARTIST
The work of Dhiraj Choudhury born in 1936 should be classified as dynamic and line-based choreography. His restless stroke says a lot both in drawing and in painting. His various portfolios of Drawings, some made abroad during his foreign travels, are a gem of art to be preserved for posterity. The paintings of him well of him could attract the epithet of "Saga".

They are telling narratives about the contemporary situation, both social and political. His characters defy tradition or iconographic niceties. Provocative and increasingly agile, endowed with a sharp sense of humor, Dhiraj Choudhary makes his audience join and participate in the activity that is presented in the pictorial space.

Born in Bengal in the 1930s, Dhiraj Choudhury has witnessed not only the incessant struggle for freedom but also the Great Bengal Famine (1943) which periodically changed the image of the benevolent Raj in the minds of the Indian people. Revolutionaries like Khudiram Bose, Aurobindo Ghosh, Rasbihari Bose, Subhash Chandra Bose, etc. they have informed his mind about the realities of contemporary India that were on the move and moving towards a different national mold taking its place among equals.

On the credit side, Dhiraj Choudhary has served as a professor of art at the Delhi College of Art and has the distinction of training many budding artists whose exemplary careers have brought a good name to both the institution and its professors. Dhiraj Choudhary, in addition to his own creative endeavors, has also designed and executed projects on humanity and social values, as well as holding more than 75 solo exhibitions of his own works, in India and abroad.

Notification - We do not usually display Dhiraj Choudhury's work, only send it to private art collectors and interested art buyers.