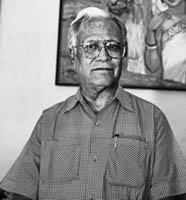 2007 'The Colors of Spring' Group Exhibition of renowned artists organized by Mind's Eye Communications at Academy of Fine Arts, Kolkata

2006 'Figure in Nature' Group Exhibition including the works of fifty-four contemporary artist organized by Birla Academy of Art & Culture, Kolkata

2010 An exhibition of artworks by various artists curated by Samita Munjal at Montblanc Boutique, Ludhiana

2009 ‘Forms & Figures’ an exhibition of paintings by Eminent Artists organized by Eye on Art Gallery, Kolkata

2007-08 All major shows held at Idiyas Gallery in Kolkata

Tapas Sardar, the young and talented painter from Kolkata, acquired a strong base in academic naturalistic style through his art education at Government College of Art and Craft, Kolkata. He completed his B.V.A and M.V.A from the same institution in 1997 and 2001. Since then he has been working in full vigor and with a sincere commitment to the temporal reality and aesthetic values and has earned several accolades and honors from various institutions in recognition of his artistic achievements.

Though proficient in academicism the beauty and originality of Sardar’s paintings rest on how he transcends the bounds of naturalism and induces a kind of meditative inwardness to extract the inner essence of the consciousness and personal traits of the characters he depicts. These characters are mostly women coming out of urban or rural ambiance of the land, whose tryst with this life is always replete with various layers of light and darkness. Sardar tries to unmask that darkened zone. He has, therefore, to resort to the expressionist verve and amalgamate it with his naturalistic modes. The expressionistic structures intrude surreptitiously especially through chromatic arrangements into the general design of naturalism and bestow a kind of mystic serenity in the total environment. In this mysticism, his paintings often reflect a kind of meditative inwardness. This empathic tranquility is an engrossing feature of his canvases, which unveils the inner reality of the feminine world through chromatic harmony and sharp linear structures. Transcendence of naturalism towards a deeper expressionistic value is the essence of his works, wherein lies his contribution in the contemporary field of creativity.